The Obon Festival of Souls was held on August 18th at the Kyoto Kagai and was hosted by the geisha of the Hanafusa Okiya.  We celebrated this event with the Okiya who commemorate and remember deceased ancestors.  We enjoyed the folk music while participating in the Bon Adori, dancing to the beat of the daiko/taiko drum.  The Bon Adori was established after the Second World War. We enjoyed the games–diving for ducks, scooping goldfish, hammer game, and a typing game, where all prizes were unique and fun, and truly one-of-a-kind.  There was plenty of fresh foods to sample–slushes, ice cold cucumber popsicles, cherry tomatoes on a stick. and sushi.

Later, we moved to the picturesque bridge where we released lanterns into the river.  Customarily, the lanterns are released in the evening.  Notwithstanding the magic of Second Life, we set our environments to midnight and were in awe of the array of colourful lanterns floating on the river and fireworks exploding in the sky. 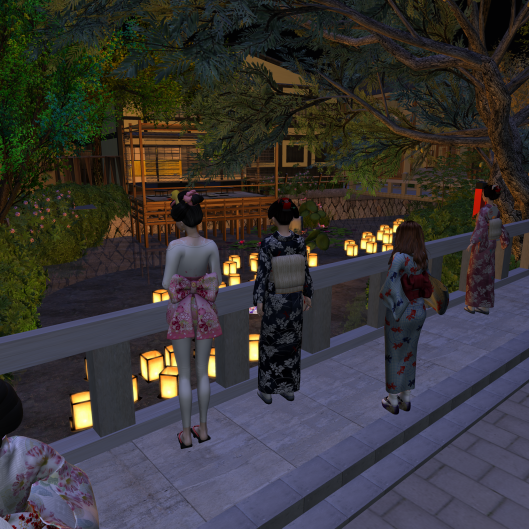 No Obon Festival is complete without a haunting Ghost story, and our host did not disappoint.  We nervously held our lanterns, which guided our path, and walked towards a small cabin with friendly spirits welcoming us.  We knelt on cushions and listened wide-eyed to the story of Hashihime, a courtly lady who was consumed by jealousy and held steadfast in its power.