Miss SL ♛ Japan’s inspiration for her national costume is Amaterasu, the Shinto Goddess of the Sun.  Ouhirume, another name for Amaterasu, shines light on hidden things and is a protector against deception. She protects the scared mirror, Yata no Kagami, which is one of the three treasures of Japan, and challenges us to look at ourselves clearly and honestly.  Ouhirume’s home is the Ise Shrine, located in Honshu, Japan.  The shrine’s maiden colors are red and white

Miss SL ♛ Japan’s masterpiece national costume called Ouhirume was custom-created by June Dion of Bare Rose.  Historically, her extremely elegant robe, called a Junihitoe with its wide bell sleeves, was worn only by noble women at formal ceremonies centuries ago.  In present day, it is officially worn only for the Imperial Enthronement Ceremony and Royal Weddings.  She wears a golden crown, anklets, necklace, also created by Bare Rose.  To complete her national presentation, she wears a traditional Japanese hairstyle called Geisha Shimada, and basic Geta sandals both by Anachron.

Miss SL ♛ Japan stands nobly in the center of the mirror which is part of Ouhirume’s shrine, and reflects on the meaning of Amaterasu—Shining in Heaven.

My deepest and grateful thanks to June Dion of BareRose for making my spectacular noble costume and to Dahriel del Piero from PosESioN for making my custom Kimono custom poses. 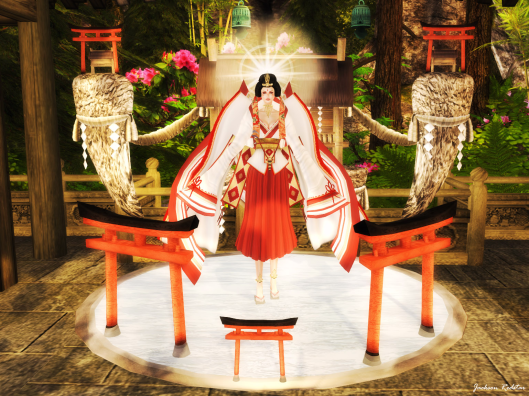 Miss SL ♛ Japan has created a mix & match Goth styling for her 3rd Mini challenge, using only items which are free.  The items can be group gifts providing the group is free to join. 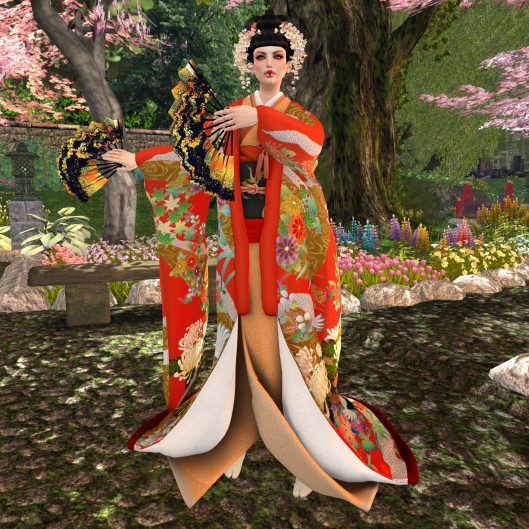 Miss SL ♛ Japan wears a gorgeous custom gown named Jaily, designed by Bea Serendipity of Ghee.  Her eye-catching silk Ink gown is embossed with an Asian-leaf motif that enhances and defines her curves.  Her  stunning jacket is also made of silk with beautiful white Lotus against an ink-blue background.  She accessorizes her styling with ornate gold jewellery from Mandala, a sleek up-do from Boon, and a fabulous Chinese Fan headpiece of ornate gold mesh with ink-blue tassels on either side which she created herself.  For a little fun drama on the red carpet, Miss SL ♛ Japan slips her pet Katatonik Ice dragon around her waist. 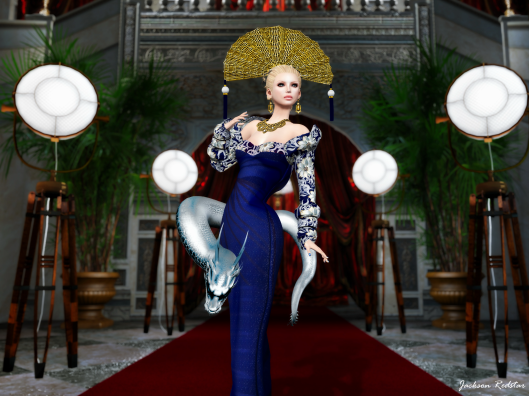 This stunning Thugs and Kisses complete set comes with; an XOXO necklace, earrings, bracelet, and a necklace featuring South Sea pearls and diamonds, set in Platinum or white gold.

Inspired by the fascinating country I represent for Miss SL 2017, I chose to wear a casual classic chic ensemble in red and white, the colors in Japan’s flag, for my live interview.

I combined this fantastic red fur and ruffle top by Kenny Rolands, and these stylish Spring tailored pants from Ghee. While wandering through the scenic Kyoto Kagai sim, I happened to find these fun comfy platform sandals. I finished by look with an edgy hair style by .Shi and this stunning necklace from Chop Zuey.